check out these blogs

If Salzburg on Saturday is a day for strolling, on Sunday morning the people of Salzburg bring out their bicycles. I’m talking about children to old people and everyone in between. We got a fairly early start because we wanted to eat some breakfast before we went to 10 o’clock Mass at the Salzburg Cathedral.

Salzburg is a city of music. Not only is Mozart their favorite son, there is a world-renown music school located here. We learned from our guidebook that the Sunday High Mass at the Salzburg Cathedral was a musical masterpiece. So after eating our breakfast and drinking our coffee (and watching two little boys ride their bikes around the plaza, deftly dodging pedestrians, while their parents drank their own coffee), we walked over to the church.

The church is a gorgeous example of Baroque architecture, with magnificent paintings and an astounding dome. 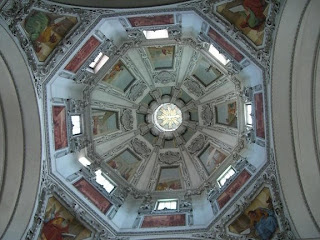 Not only was Mozart baptized at this church, he played organ there for two years. There are actually four large pipe organs, and it would be unbelievable to hear them played at the same time. Today only one organ was played, but beautifully.

In addition to the organ, there were two trombones and two trumpets. There was also a wonderful children’s choir, consisting of about 120 children, boys and girls, from probably about age 5 to teenagers. We got there very early because we wanted to get a seat right under the dome where the acoustics are the best. As a result, we had the opportunity to hear the children practice before the Mass. Wow. They were amazing.

The Mass was gorgeous. The procession in at the beginning started from a door in front of the altar, and the participants proceeded all the way down the side aisle and then up the middle aisle to the altar. It consisted of five priests and a bishop, and 14 acolytes (both boys and girls). They processed in to a Latin hymn sung by the wonderful children’s choir.

Not understanding German, I was entirely lost during the homily, so I watched the children. While they might sing like angels, I was amused to see that during the homily, they behaved just like normal children – poking, giggling, fidgeting, scratching their ears with their music, whispering.

To my readers who are non-Catholic, I offer my apologies. I just have to explain one more thing to my Catholic family and friends. For the past few days, we have been experiencing Austria and Germany, where the people are organized and precise. I’ve come to expect that. So it was with much surprise that I witnessed their reception of the Eucharist. As I started up the aisle, very assertive Austrians were suddenly overtaking me. I couldn’t imagine why they were passing me. Bill whispered to me that there were two communion rails before which people lined up to receive the host. But there was no organized procession to the rail. Seriously folks. It was each man and woman for him and herself. People were coming from the back, the sides, from all over. And about the time that we were finally nearing the rail, they let loose the children’s choir. All bets were off at that point. As Bill said, those kids can fit into little spaces and they certainly did so. I seriously felt like I was trying to get into a rock concert or a soccer match. The worst thing was that when I got back to my seat, I wanted to whisper to Bill that in all my years as a Catholic I had never seen anything like that, but I got a case of the giggles such as you can only get in church. I had tears running down my cheeks from laughing. It was really one of the funniest things I’ve ever seen, and I’m afraid not much of a spiritual experience.

After church we stopped at one of Salzburg’s famous frankfurter stands. Weenie stands, really. Austrians don’t eat their wieners on a bun. Instead, they eat their wiener and their bread separately. It apparently took American ingenuity to figure out that you can cut the bun in half and stick the weenie into the bun. But it was wonderful. 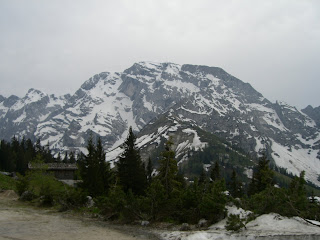 We came home and changed clothes (the Austrian dress up for church; I even saw a woman wearing white gloves). We got into our car and drove up to Berchtesgaden, a gorgeous alpine town about 30 miles from Salzburg, in Germany. It was made famous because it was one of Hitler’s favorite places and he built a house there where much of his war planning took place. The house is now a restaurant, but it was unfortunately closed because of technical problems. We were able to visit the bunkers that were built near there to house German troops, and the Nazi Documentation Museum, which gave many graphic and interesting details of World War II, how Hitler came to power, and how the war developed. I enjoyed it very much and learned a lot. It was interesting to hear it from the German perspective. We drove high into the Alps, as you can see from the photo. 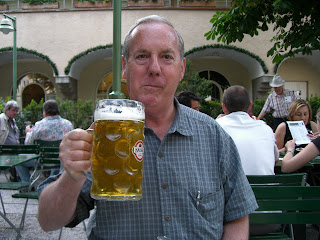 We came home and rested a bit, and then went out for a bit to eat. We enjoyed schnitzel and a brew, and Bill drank a beer the size of a small garbage can. He was very happy.
Posted by the reluctant traveler at 12:36 PM

If you're in Salzburg for another day, be sure to stop by the Augustiner. I probably did not spell that right, but its a huge beer garden, you can't miss it.